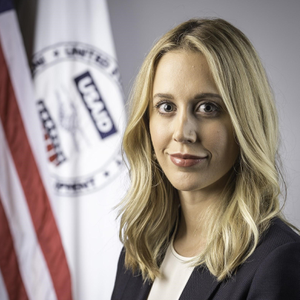 Victoria Whitney is the Chief Operating Officer (COO) for Prosper Africa, a U.S. Government-led initiative which aims to substantially increase two-way trade and investment between the United States and Africa. In close coordination with the White House, she oversees an interagency secretariat charged with maximizing the impact of U.S. government tools to mobilize private capital, improve business climates, and accelerate African economic growth. Most recently, Ms. Whitney served as the Senior Director for Global Strategy and Communications at the U.S. Agency for International Development (USAID) where she advised executive leadership on strategic planning, communications, and the alignment of resources across priority objectives.

Prior to her government service, she led marketing and communications strategies for high-profile B2B and B2C clients at Splash, a leading event-marketing software company. She also oversaw enterprise business development. Ms. Whitney began her career as a news producer with ABC, CBS, and Al Jazeera America in New York. Ms. Whitney earned her degree from Sarah Lawrence College and has lived and studied abroad in West Africa and the Lake Victoria Basin.